Meet Qwerty - (one of) the reason(s) I haven't been collaging

I've been absent for awhile. And no collage poems.  Last time I was here, I mentioned that there were cut out words spread all over my dining room table. Now they're put away and it's all because of this cheeky little fella, who has burrowed deeply into my heart. 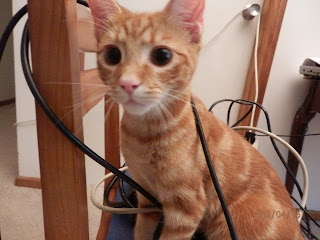 This is Qwerty.  My ginger kitten, my bower bird, my monkey boy, my laptop sitter. He's cheeky and he's into everything.  He discovered the cut out words on the table and quickly spread them over the floor.  He sits on my bookcase next to the candle holder and knocks the pebbles from the base onto the floor, watching and listening in delight as they drop. He raids my bedside drawer and carries off strips of tablets. He opens my jewellery box and hides necklaces in the laundry basket.

He supervises me in the shower, he supervises the washing up, turns on the roomba vaccuum cleaner and stalks it around the room. His curiosity knows no bounds and he fills me with delight. He even has his own blog:  Lord Qwerty Byron

So there has been not much collaging lately, but that will change.  I just need to put it back on the table and let him join in if he wants to.  Who knows? Maybe he will come up with his own poem.  Stay tuned.

But here's one I prepared earlier. Enjoy... 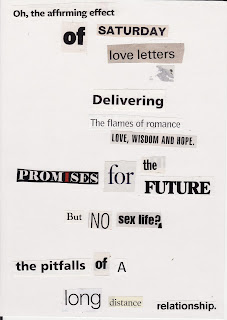 What I learned about collage poetry in 2011

So, I discovered a few things about collage poetry this year.

Firstly, I can't do the collage poem a day thing, so I won't be posting any more 365 day challenges - there lies the way of madness.

When I start creating collage poems (and the whole mess that goes with it), I generally have 4 or 5 poems on the go at once. A phrase may make absolutely no sense in one poem (though it's not always a bad thing to challenge logic) but will fit beautifully in another poem.

My poems come in binges - the workshop I presented in September led to a binge that lasted several weeks, spread across my dining room table and my work desk and resulted in 18 poems. On average for that period, I made a collage poem a day. 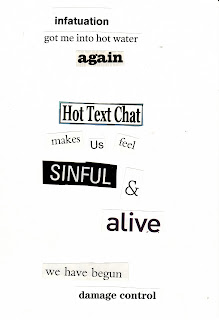 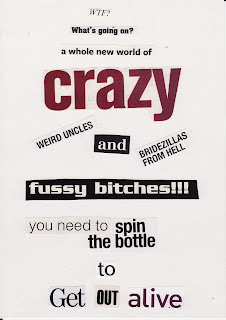 So for 2012, I have set a goal of having a collage poetry binge weekend once a month.


Check back here for the results.

Meanwhile, here is my 'theme' for the next 12 months. 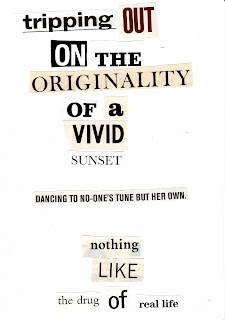 Bitten by the Collage Bug

Last Saturday, I presented my Sliced and Diced Collage Poetry workshop to Bellingen Writers Group at the gorgeous venue, North Farm. I have posted photos from the workshop on my Write on Track blog, but since the workshop, I have been constructing collage poems again.  Not only did I get the participants excited about the process, I re-ignited my own collaging bug.

Since the workshop, I have created 8 new collage poems. 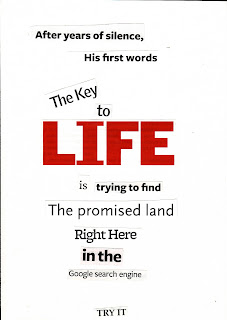 My desk has been littered with runaway words and other words trying to seek a home on a piece of cardboard. 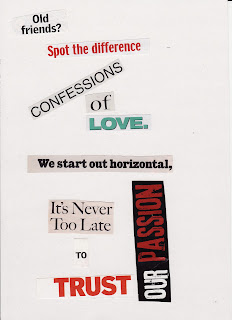 And there was a reason why I excavated my dining room table last week.   So I can collage and each poem can percolate exactly as long as it needs to... 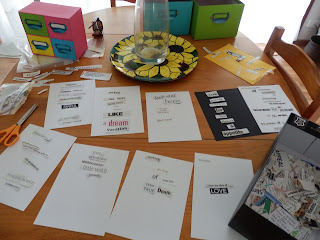 A few years ago, I attempted a 365 days of collage poetry challenge - it lasted a month before it fizzled out. But there were a couple of things that hampered the project.
1. My Virgo partner - who wasn't very impressed by runaway words, cut outs and half-constructed poems everywhere.
2. my beautiful cat, Dorkus, who was impressed and liked to contribute - in not always a constructive way. 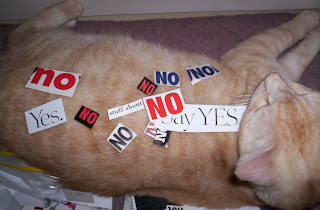 Sadly Dorkus is no longer around to mess up my half-constructed poems, and bless them with his cat hair,  and the partner became an ex-partner last year, so he can no longer grumble about any kind of creative mess I make.


Have scissors, will cut.
Have glue, will stick.
Have imagination, will create.
Have life, will have fun.
With 8 or more poems in progress on the dining room table, I may re-commit to a 365 day challenge. I'll see how it goes over the next few weeks - stay tuned to see what the bug may bring...
Posted by Diane at 3:26 PM 2 comments:

Nambucca Valley Writers Group is compiling an anthology called Food for Thought with all of our members asked for contributions based around food and recipes, up to 10 pages.

Instead of writing a short story with recipes, I decided to do something a little different, a little out of my comfort zone, a bit of a creative stretch for me. I decided to create a collage story.

The text was easy - once I started, it just flowed out. It became a story about body image, about the media's schizophrenic obsession with body image, about how my body image has been shaped over the years. I had many food magazines I could cut up for background collage photos along with the usual gossip magazines and sensationalist headlines. But then I was advised new parameters for the artwork: everything had to be in black and white, so it would reproduce okay.

That condition vetoed my use of magazine reproductions - photos of food in magazines do not come in black and white. So here I was with 490 words of text, and nothing to stick it on. I'd even worked out the layout of the text in a visual diary, but I was still waiting for the vision.

I started thinking about an artwork I'd seen many years ago, most likely in a Biennale at the Art Gallery of NSW. It was by Barbara Kruger and called "I can't look at you and breathe at the same time." The text was superimposed over a black and white image. This long ago memory became my base inspiration.

I bought a new camera. I thought about the words, and I thought about the text and the images that would suppport or juxtapose the text. I decided to take photos on my trip. Surely in Melbourne I would come up with some great photos for the project. My photos of chocolate on the chocoholics tour did not meet my requirements for the backgrounds - something about the way handmade chocolate is laid out for sale doesn't really make it photogenic. Nice in reality, but it doesn't make the conversion to two dimensions.

On my first free day, I went to Queen Victoria Markets. I gazed wistfully at The Drunken Poet pub and remembered the night back in April when I had watched Chris Wilson play, and thought briefly about the matchbox accommodation I'd stayed in that night. I'd picked much better accommodation this time around. Then I headed into the markets, only mildly distracted by clothes, because produce was my target.

And I took photo after photo of yummy stuff: 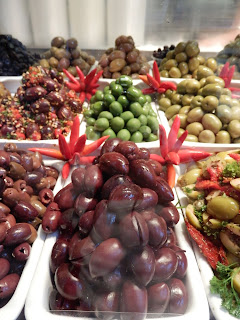 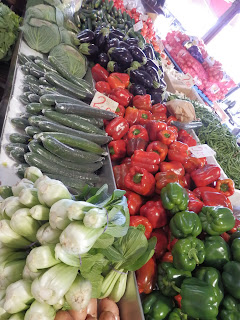 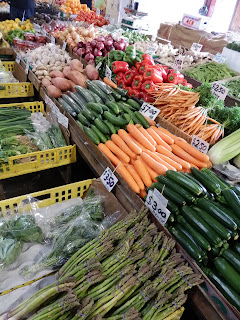 When I got back home, I had the images printed in black and white, cropping so that they were all in portrait view rather than landscape. I ordered 5X7 prints as that is the closest to A5 - the format the anthology will be printed in. Then I printed out the text, cut it up, and laid the photos on the table, matching the text against the background images. 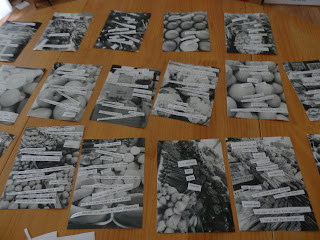 And it worked. I didn't need any extra text cut from magazines. The food photos and the text are enough to make my point. 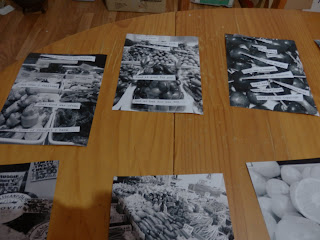 Now I'm wrestling with double-sided tape to get those words into place. Who knew it would take so long to stick the words down? Then I will scan the images and email them to our Food for Thought editor.

It's been a long absence from this blog, but I've noticed that I'm getting many hits on my website for collage poetry - so I plan to be around more often, creating poems more often and in two weeks time, I will be presenting a 'Sliced and Diced' collage poetry workshop to Bellingen Writers Group. Later I will publishing 'how to make collage poetry' tutorials to my website.

Stay tuned and cut and paste! 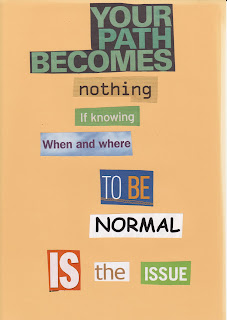 Finally, some new collage, thanks to my recent retreat with my writers groups. Jen and I got collaging, and I suggested we have some collage weekends in the future as there's no point getting out all those words and make all that mess for just one poem.
Posted by Diane at 12:34 AM 1 comment:

Now that Zazzle has tools to create many products at once, I'm spending more time in my zazzle shop:

Come and have a browse!

It's been a long time between collages...


but with Jen back in town and the Byron Bay Writers Festival to renew our mojo, new collage poetry was created.

Because Nicky, the main character in my story Diary of the Future creates collage poetry, I have been aiming to create poems that relate to teenage life. So I created the following about a teenage party: 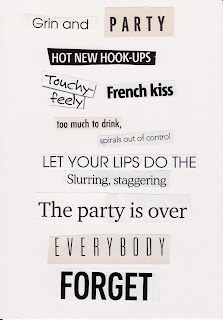 Grin and party
Hot new hook-ups
Touchy-feely french kiss
too much to drink
spirals out of control
Let your lips do the
Slurring, staggering
The party is over
Everybody
Forget

I didn't create the next one to be part of the teenage theme, but as I posted it to the blog, I realised that there was a natural progression in themes. Hee hee! Actually, I'd created the next one, because I was amazed at how many times the word 'pregnant' had turned up in my box of words. And 'pregnant and paranoid'? I just had to use that. 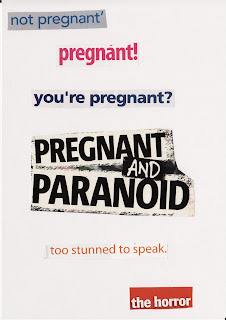 not pregnant
pregnant!
you're pregnant?
PREGNANT AND PARANOID
too stunned to speak
the horror

I'm hoping that this new spurt of collaging will result in a renewal in the desire to collage. As I said, I want a number of poems that will fit in with Diary of the Future, and with the news that lulu.com now has a printer in Australia, a combined anthology featuring poems from both Jen and I is a real possibility.

Welcome to the Chickollage blog - my adventures in collage poetry.

Have scissors - will cut.
Have glue - will stick.
Have imagination - will create.
Have life - will have fun.

Diane
I'm a 43 year old writer of Young Adult and contemporary women's fiction as well as a collage poet. I live on the Mid North Coast, NSW, Australia. I've worked in arts administration, theatre and founded a film festival. My day job has very little room for creativity so now it is time for me to get serious about my writing aspirations!

Visit my other sites

Other collage poets and artists